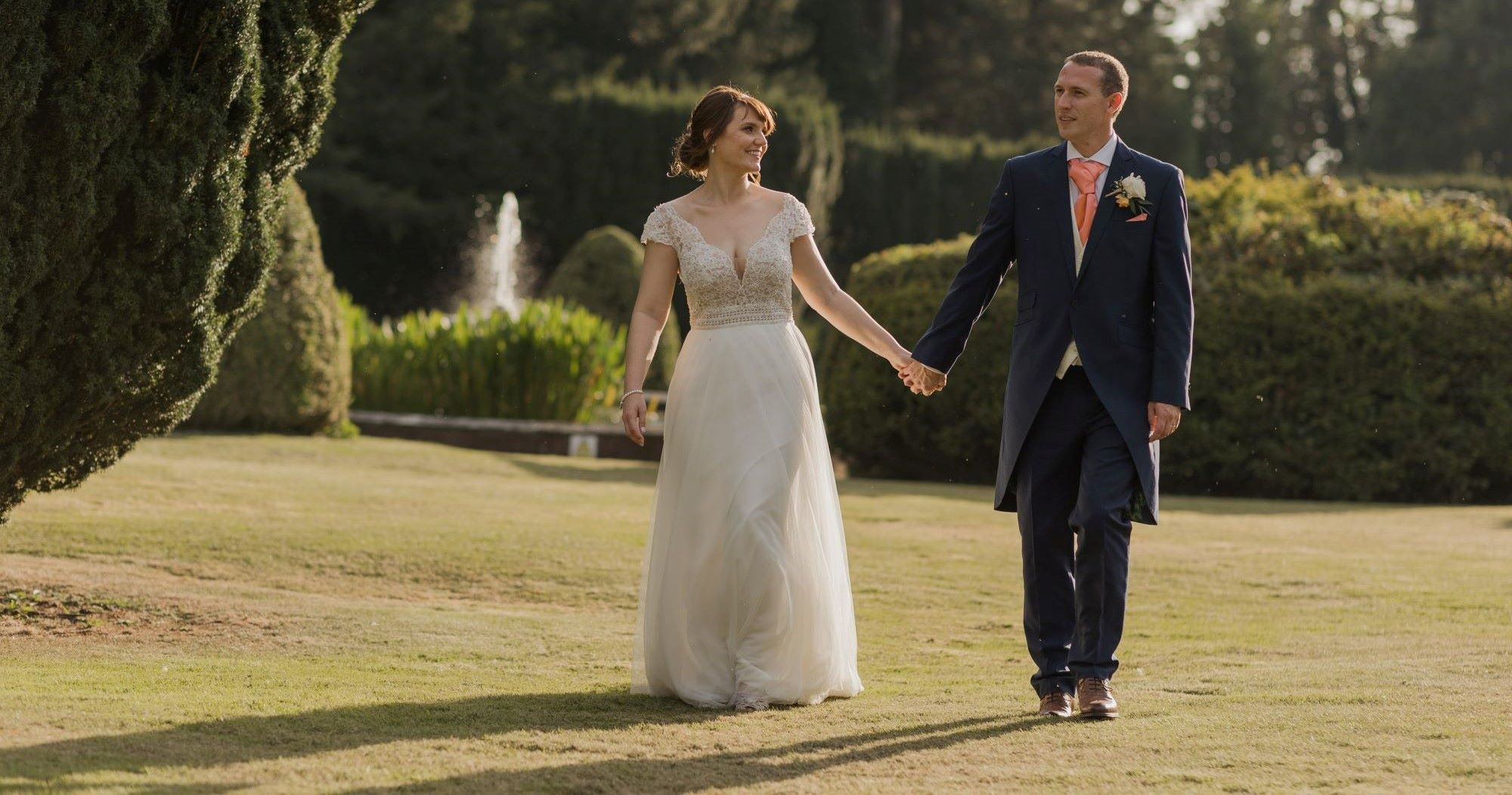 Back to Blog Jodie and Ben’s Wedding

Standing in 22 acres of beautiful parkland in rural Hertfordshire, lies Hunton Park Hotel. Far from being remote however, this great wedding venue is close to the picturesque village of Kings Langley and just north of Watford.

Approaching the 62-bedroom hotel, a sweeping driveway leads you to the magnificent Queen Anne mansion house. With tall white columns and classic Georgian proportions it’s little wonder this was chosen for the location of the romantic seventies movie, The Raging Moon, starring Malcolm McDowell and Nanette Newman. It also provided the backdrop for Josie and Ben’s memorable wedding.

Hunton Park spans almost 190 year and its history revolves around two houses named ‘Hazelwood’. In 1810, wealthy Henry Botham arrived from London with his wife. He bought 43 acres of land and built Hazelwood House. In 1816 he purchased a further 10 acres but died 10 years later. His wife, Lydia, continued to live at Hazelwood House. She bought more of the surrounding land, leaving an estate of 74 acres when she died in 1838.

Lydia Botham had no family of her own and left the Hazelwood Estate to a relative, Samuel Charles Gambier. Samuel never chose to live at Hazelwood and sold the property to his cousin, Henry Robinson-Montagu, a year later. In 1847, Henry became Lord Rokeby. As a boy soldier, he fought at Waterloo and later in the Crimean War. When he left the Army he lived at Hazelwood. After the death of his wife he remained there with his daughter, Elizabeth, improving the property and gardens, until his death in 1886.

The house then had a series of owners, including Henry Stewart Gladstone. Gladstone made further improvements to the property before a fire completely gutted the house in 1908 and had to be demolished. The Revd. Gladstone began rebuilding immediately. The second Hazelwood House, although similar in style, was built at a different angle to the ornamental gardens.

In 1930, the building was sold to local businessman and landowner, Francis Edwin Fisher. Francis enjoyed travelling and on one of his forays he met, and married, the explorer and writer Violet Olivia Cressey-Marcks. They had two sons, Ocean and Forest. Both Francis and Violet enjoyed extensive travel and were away from Hazelwood for long periods and so the house was either unoccupied or tenanted by others. One short-term occupant was Emperor Haile Selassie of Ethiopia who had been exiled from his country.

During World War II, part of Hazelwood estate was used as an airfield, now known as Leavesden Aerodrome. With the death of Violet soon after the war, the family was faced with huge death duties and the house fell into disrepair.

It was businessman Paul Edwin Hembler who bought Hazelwood in the early seventies and changed its name to Hunton Park. He sold the property in 1979 to the Dexion Group, who used it as their HQ. Since then, owners have included the Prudential Group and Initial Style Conferences until Alternative Hotel Group purchased Hunton Park in 2005, later re-branding as De Vere Venues.

With sunlight flooding the room, Josie was preceded down the aisle of The Orangery by two adorable pageboys and three radiant bridesmaids – and on the arm of not one, but two, distinguished men!

Hunton Park is licensed to hold civil ceremonies for up to 175 guests indoors and 110 for an outdoor ceremony. The Orangery can host just over 60 guests and proved to be the perfect choice.

Giving direct access to the stunning gardens for a drinks reception, the Terrace Marquee, with its own bar and dance floor, was just ideal. If you choose this option, then Hunton Park can cater for up to 150 guests for the wedding banquet and up to 250 for the evening celebrations.

Before the party was in full swing, we were able to whisk Jodie and Ben away to capture them spending some romantic moments together in the lush gardens and dramatic backdrops of these extensive grounds. On such a beautiful summer’s evening, it was a wedding photographer’s dream!

Take a look at Louise and James’ Wedding, another charming Hertfordshire manor house offering both character and extensive grounds